With the news last week of Ethiopian Airlines placing their fifth order for new Q400s, we take a look at which aircraft types have customers who have placed multiple orders.  For an airline or lessor to place a follow-on order requires a high level of confidence in the aircraft.  This confidence can be subjectively measured by comparing the percentage of customers who have placed more than one order of an aircraft type. 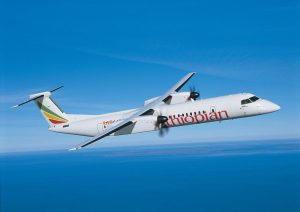 A lack of follow-on orders directly from a manufacturer could be a result of several factors:  availability of aircraft on the leased market, second-hand aircraft, or simply a young program which hasn’t delivered enough aircraft for airlines to choose to re-order.  The latter is clearly the case with the A350, which, by all accounts is seeing strong confidence in the platform from its operators, however simply hasn’t been in service long enough for airlines to re-order.

Yet, the Q400 is where we focus our attention as the latest order for 10 aircraft from Ethiopian Airlines makes news.  Built to be the rugged work-horse required in a competitive market like Africa, Ethiopian is again showing confidence in the Q400.  I will fully admit it is impossible for me to hide my bias for the Q400, yet you can imagine the satisfaction in running the data and finding the Q400 at number three on the list of aircraft with the highest percentage of repeat customers.

If you would like to reach out to us regarding our analysis, please don't hesitate to Contact Us.