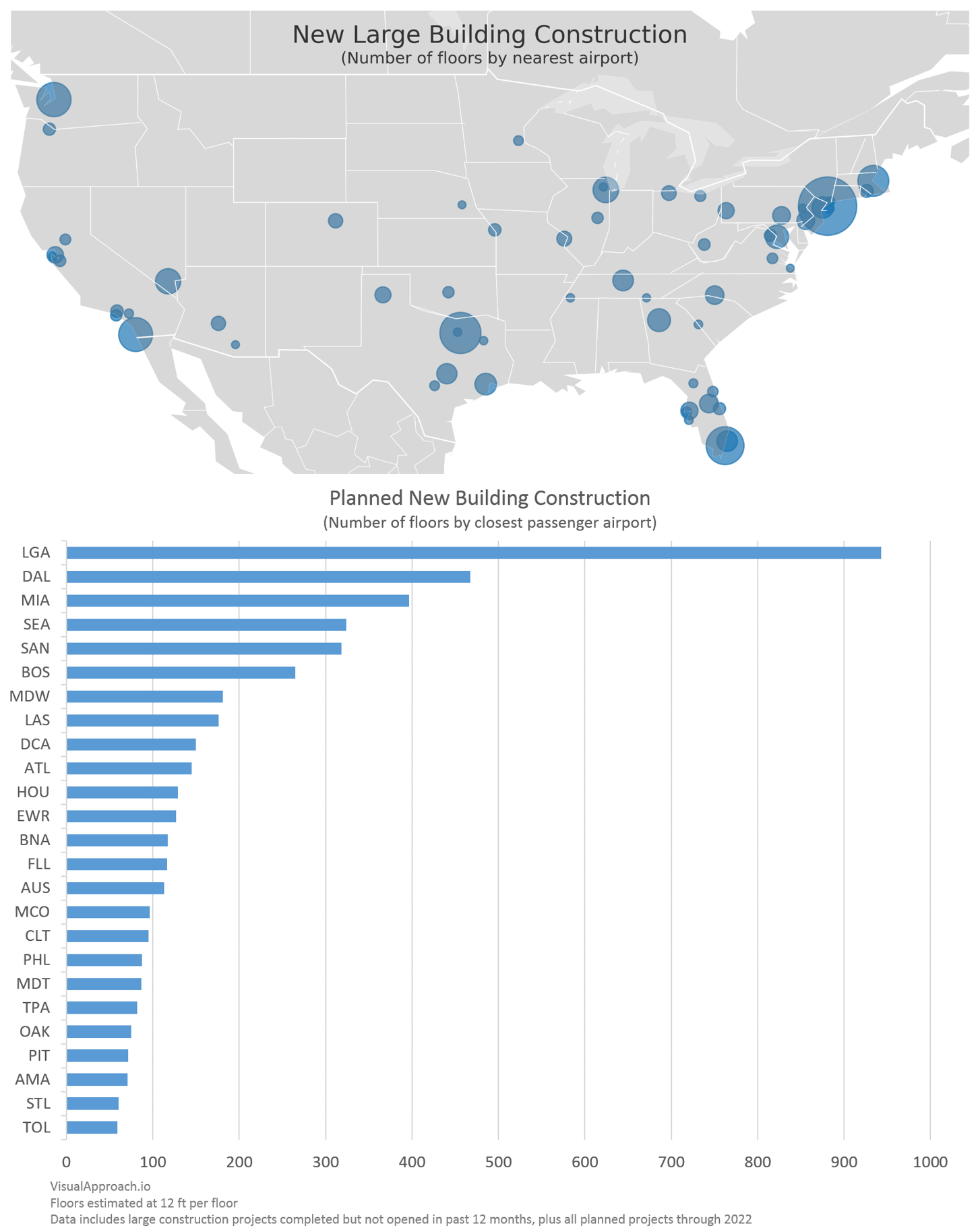 There is a lot of data in aviation. It’s one of the unique things about this industry, particularly in the U.S. where the amount of public data available is massive. However, as great as this data is, it is available to everybody (or those willing to clean and look at it). Everybody is making decisions based on different views of the same data. This inspired us to find new sources of data that are not currently used in aviation planning. Can alternative data sets be found that are relevant to the planning space, yet secondary in its nature? Can we find leading indicators to suggest where the industry is growing beyond just drawing trends based on where it’s been? Finding new sources of insights is critical in building the big picture when forecasting market demand, especially when it provides a competitive advantage. Our first attempt at this is the Visual […] 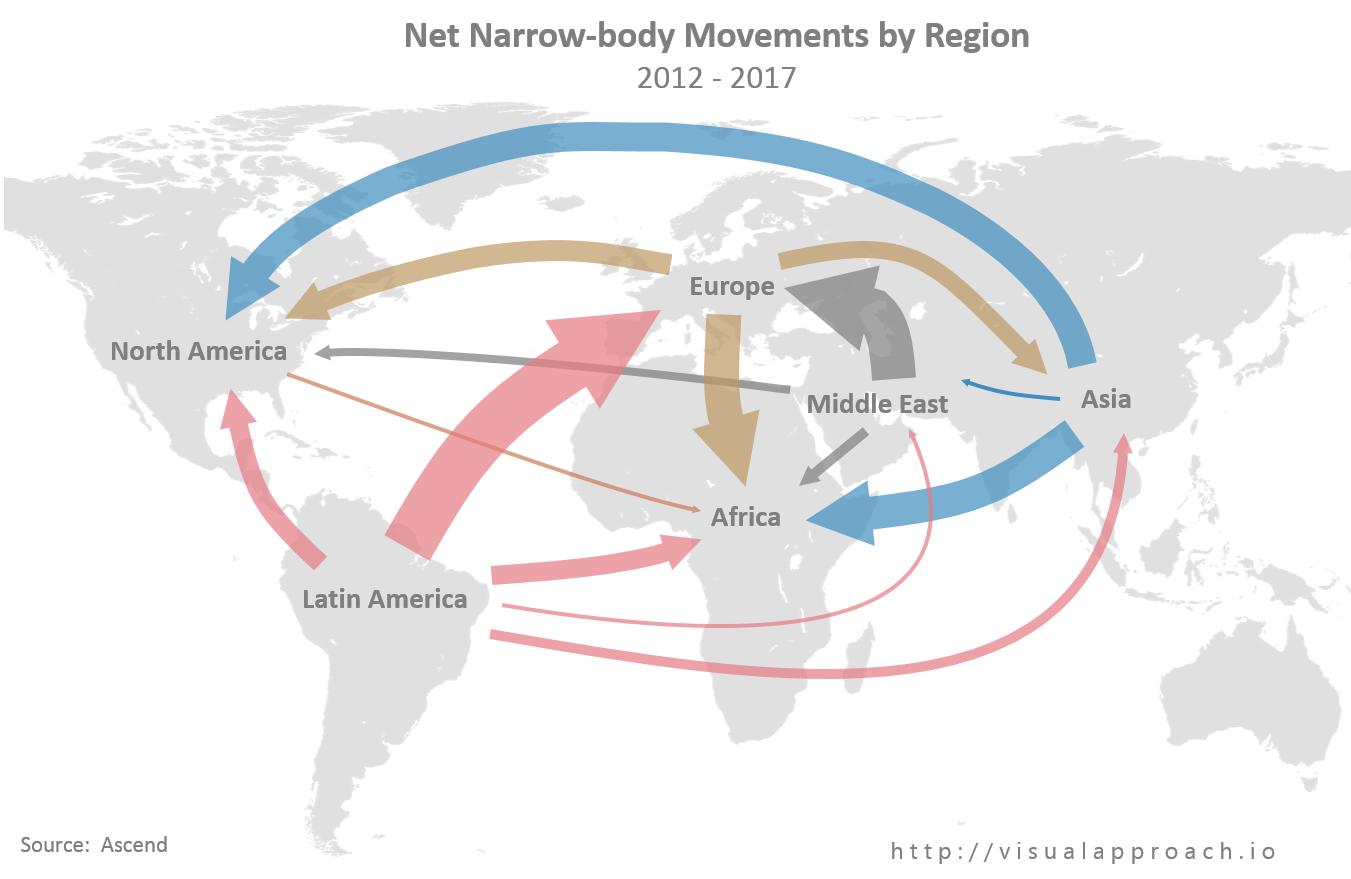 When we think of aircraft movements, we typically think of individual flights.  However, aircraft often change ownership from region to region in fairly predictable ways.  Historically, new aircraft entered the mature regions such as Europe and North America after which they were sold to the developing regions. While this certainly holds true on the continent of Africa with that region’s airlines being a net importer of used aircraft, it is no longer the case in the rest of the world.  Latin America, Asia Pacific, and especially the Middle East have become net exporters of used aircraft as they rely on a continuous supply of new aircraft and work to make room for the hundreds of new aircraft orders coming.  Europe and North America have likewise become net importers of these same second-hand aircraft. The shift in North America is particularly interesting as top-tier airlines such as Delta, American, United, and […] 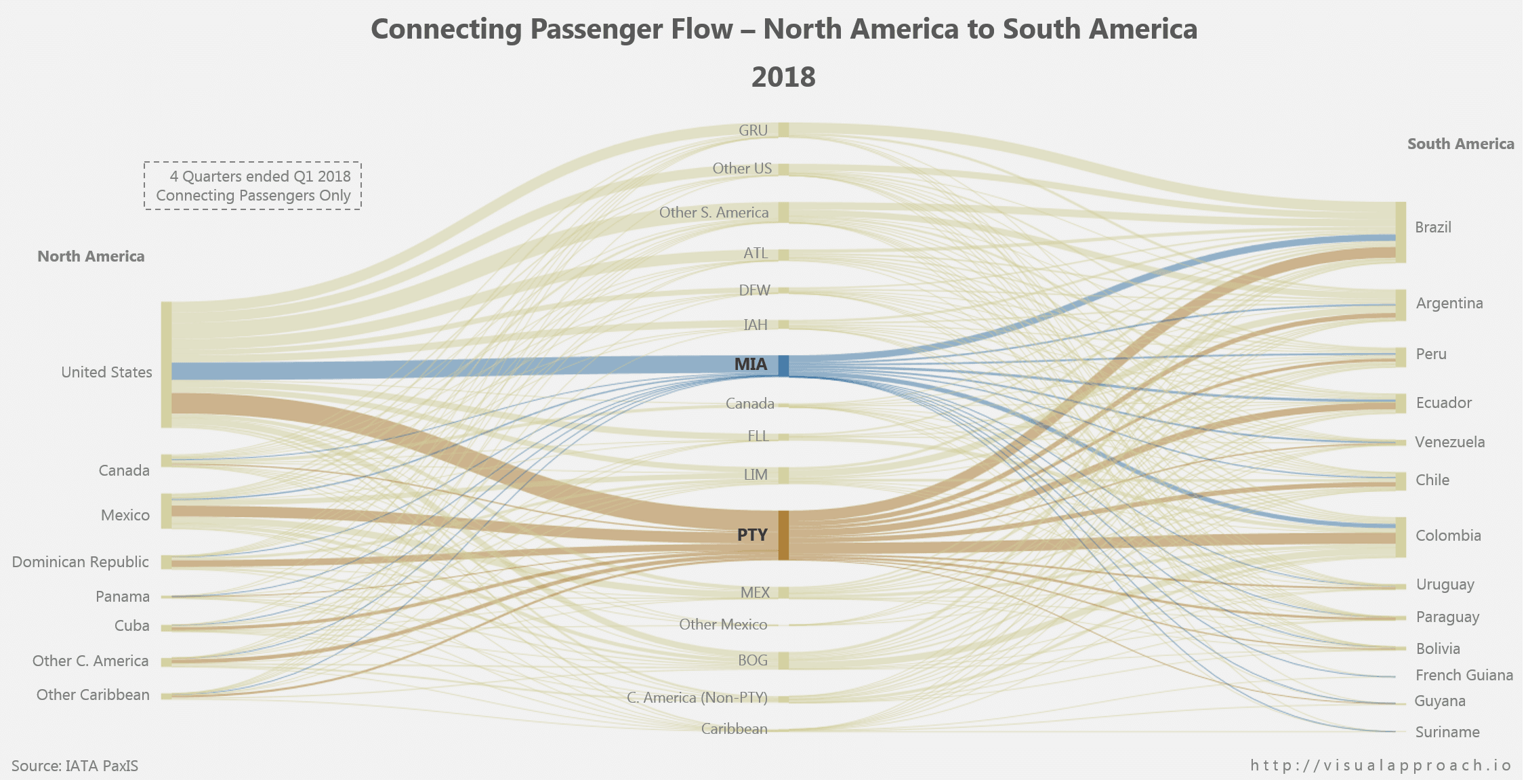 A running joke has long been that the capital of Latin America was not even in Latin America, Miami.  To get from North to South America, more likely than not you went through Miami.  Even flights originating in Central America or the Caribbean destined for South America would often connect through the south Florida hub. As of 2006, almost half of all connecting passengers destined to South America from the United States found themselves in Miami, and a full quarter of all North American connecting passengers were routed through Miami. Panama City, through the young Copa hub, was a distant second, yet already doubled power hubs such as DFW, ATL, IAH.  Even the massive Latin American metropolitan center of Mexico City with ten times the population connected less than half the number of passengers to South America. With a small presence in the U.S., PTY pulled mostly from within Panama, […] 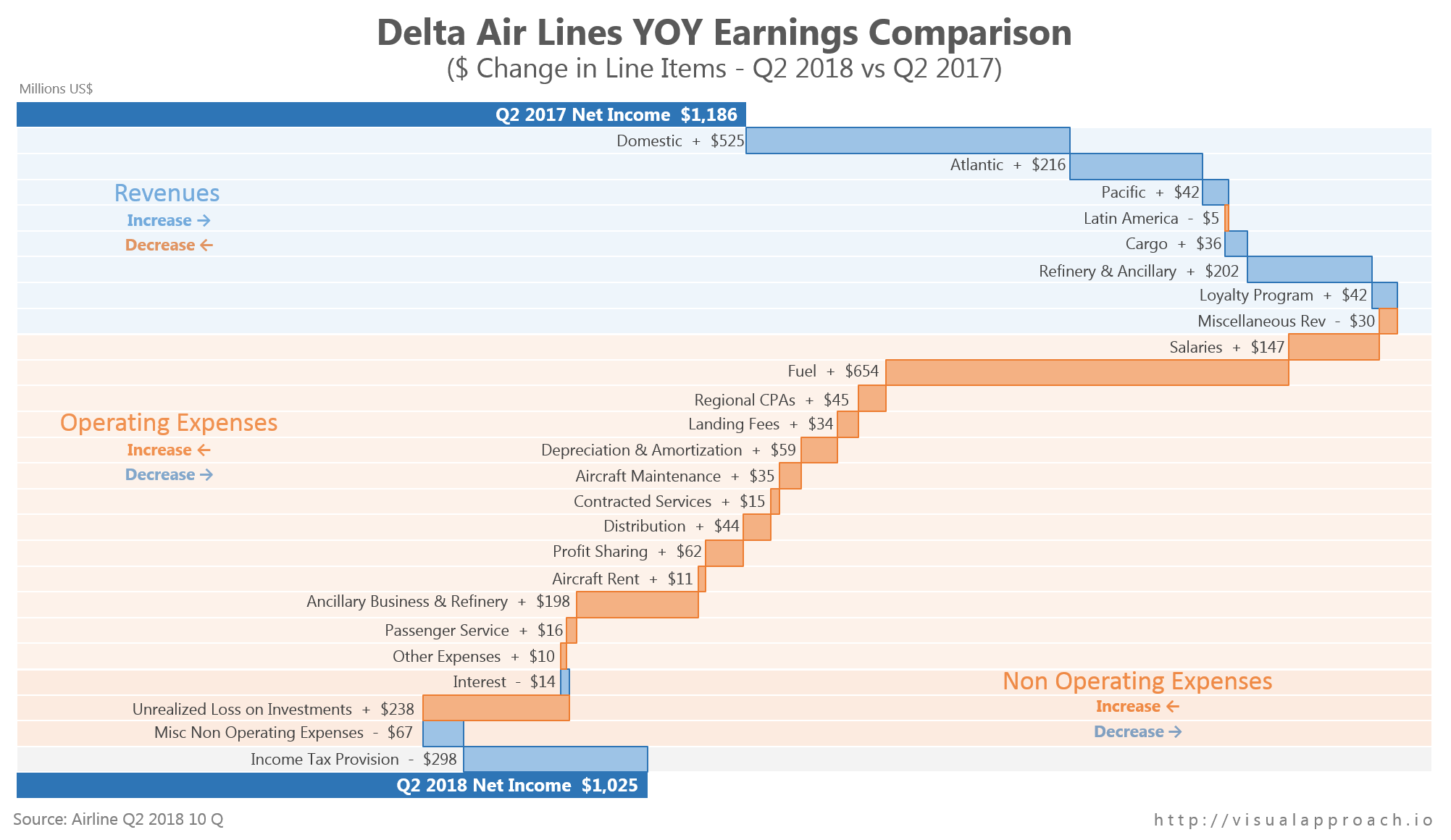 Continuing on with new ways of visualizing earnings information, this week’s charts focus on understanding how detailed earnings line items have changed year-over-year.  Starting from Q2 2017 net income, we can track each individual line item of the income statement and how that impacted the net income for Q2 2018.  The result provides a unique perspective into the strategies of the U.S. legacy carriers. The short story is that fuel costs have greatly increased for all airlines.  Yet, it is how the airlines have been able to manage the increase in fuel costs that proved to be the difference this quarter. Both United and Delta were able to increase ticket revenues beyond the increase in fuel costs, while American struggled.  United fared better than Delta in managing ex-fuel expenses as the folks in Atlanta saw expenses increasing across the board.  Yet Delta’s ability to continually find new revenues left them […]

(All numbers in millions USD) Four times a year we are bombarded with numbers as companies report their earnings.  Through this onslaught of numbers, it is not difficult to find the relevant information on how an airline performed in that quarter.  Taking a visual approach to earnings provides a different perspective. This week we visualize the three U.S. Legacy carriers Q2 earnings in the form of a sankey diagram.  This type of diagram shows the flow of revenues into the organization, and it’s exit out;  through operating expenses, non operating expenses, or income tax.  What’s left is net income. These charts also illustrate the differences in each of the airlines’ reporting.  While all break down revenues by region, United splits out regional revenues, while Delta and American explicitly show loyalty program revenues.

While hundreds of aircraft are announced during the week of the summer airshows, the reality is often a different picture.  Aircraft orders don’t happen overnight, even within a week.  They typically take months of preparation, analysis, and negotiations bringing into question exactly how so many deals get done during airshows. The answer is fairly obvious in that airshows become a target for close-in deals to be timed for the wow factor.  A deal can be delayed by weeks to fall into the airshow, or accelerated to catch the buzz of the show.  Of course there are always exceptions where companies can move extraordinarily quickly, but by-in-large airshow orders are planned weeks and months in advance.  Announcing a firm order at an airshow adds value beyond the manufacturer as the airlines also enjoy the positive publicity around a new aircraft order.  However, beyond firm aircraft orders, there is another way manufacturers […] 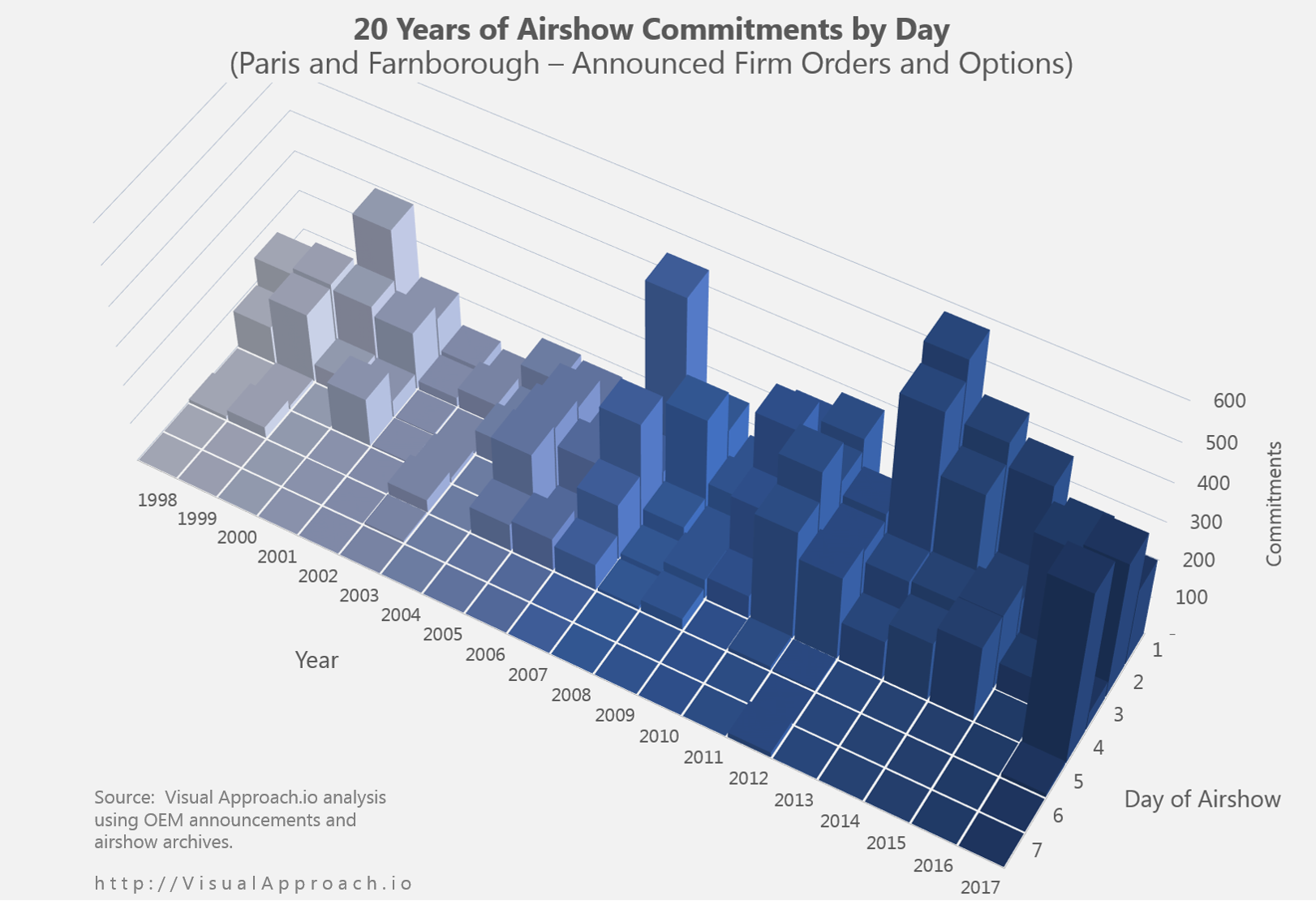 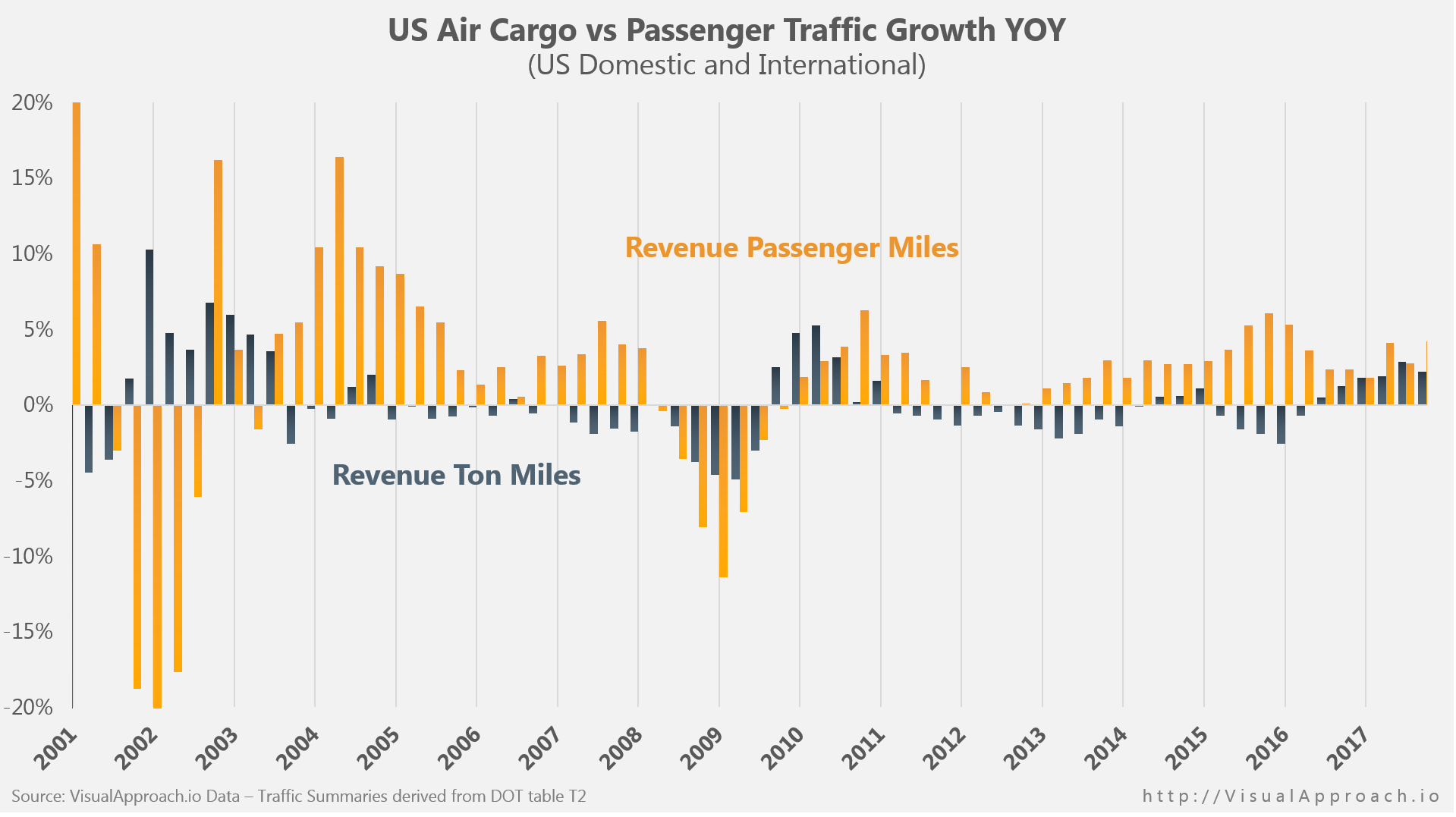 One of the major challenges in the airline industry is forecasting demand.  New aircraft typically require orders to be placed years ahead of delivery.  Aircraft heavy maintenance schedules are set years out, which largely determines a retirement schedule.  As a result, the ability to forecast capacity requirements years into the future is key to not only the airlines, but also the manufacturers, airports, lessors, and MRO facilities, among countless others. A typical forecast may rely solely on scheduled new aircraft deliveries in a backlog and an averaged retirement schedule based on aircraft age.  While that may be sufficient for some, truly understanding the fundamental capacity and demand requirement can create a key competitive advantage.  A lot of time is being spent at VisualApproach.io determining which factors affect future capacity needs, then building artificial intelligence models to improve the fidelity of our industry forecasting. The typical variables we all grew up […]