Our week involves working with clients to build deep insights and forecasts for the coming market. With terabytes of new data ingested each week, we are constantly performing new techniques to find the new trends, and to convey them through visualized data.  This newsletter is just a portion of what we discovered throughout the week.

For industry observers, professionals, and those just curious, we offer the following insights free of charge.

Revisiting our original 2021 forecast from October, the U.S. air traffic rebound has exceeded even our expectations. Our decision tree modeling was used to determine the proceeding 14 months at a time when the pandemic was barely six months old. Still underestimating the actual recovery, the consensus drawn from this forecast has proven to be the closest approximation published.

In October 2020, the first signs of the second wave of the coronavirus to hit the U.S. were just starting to arrive. This stalling of growth was expected and reflected in the forecast, however, the end of the wave was also considered. The decision tree process forced our forecasters to see beyond the current pessimism of the day, the first significant back-slide experienced during the epidemic.

Even then, the negative effects of the second wave were over-estimated while the continual upward pull of GDP, holiday travel, and ultimately the vaccine worked to accelerate the return.

Unfortunately, international travel restrictions continue to suppress travel in other countries, namely Canada which saw barely 13% of it’s 2019 levels as of last weekend. While frustration with the delayed repeal of travel restrictions mounts, so too does pent-up demand. Given the opportunity to fly, air passengers have found ample reason to be somewhere else – anywhere else – than where they’ve spent the past year.

Once governments deem it is safe to begin traveling again, we expect a rapid return to… well… leaving. 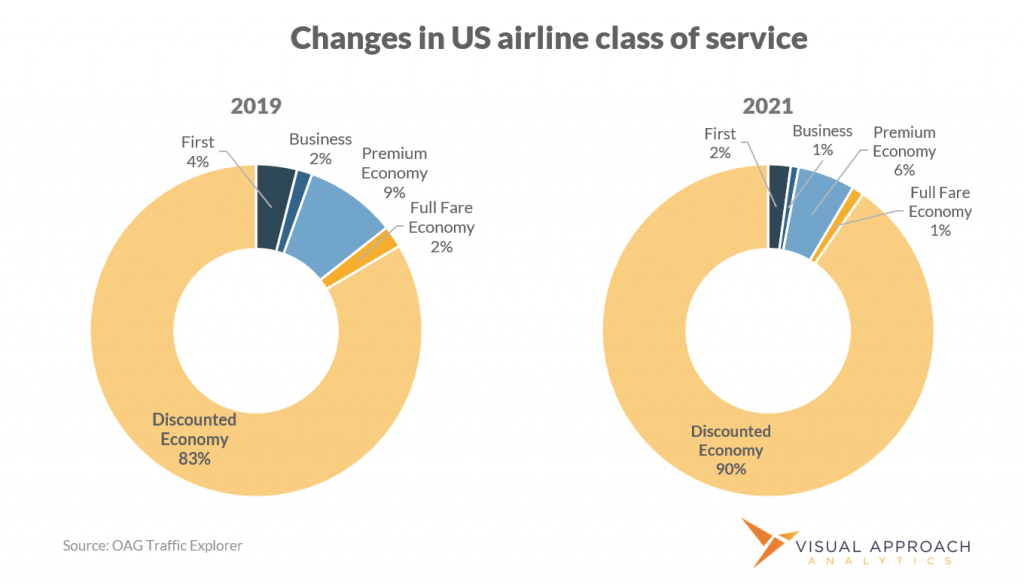 A surprise to nobody, the mix of passengers in 2021 has moved decidedly in favor of the discounted economy fares.  Yet, within the tiny slices of the doughnut chart, an interesting new trend is emerging.

Premium economy bookings are holding strong, and returning faster than their more traditional counterparts of first-class and business class.  Of course, the line between first and business has been blurring for decades, rarely both finding themselves available on the same aircraft.

Yet, the original purpose of business class (not first-class, but certainly not with the riff-raff) appears to have shifted.  With much of the traffic recovery on domestic aircraft where first-class often does not “exist”, premium economy has become the go-between, filling business class’s role.

The number of passengers passing through TSA checkpoints continues to rise… slowly. This is a great sign.  Considering all of the terrible news last week, regarding high-profile COVID-19 infections, the traveling public continues to return to the skies, albeit at a trickle. Why?

American runs out of available pilots in June, prepares for July 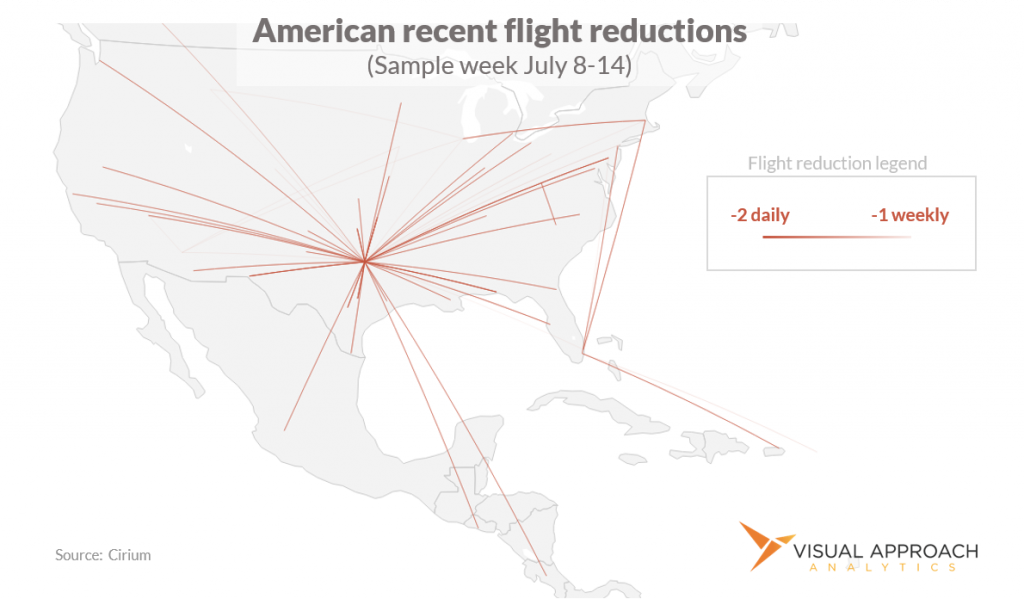 Cranky Network Weekly looks at the strategic network changes made by the U.S. and Canadian carriers.  If you are interested in more, contact us at [email protected] to receive this week’s report for free.

Mostly a Dallas/Fort Worth Cut

❖ All other markets center on DFW, though the cuts aren’t exactly the same on every day.

❖ Most of the cuts are 1x daily during the period in markets that generally have multiple frequencies.

❖ There is nothing about this cut that would make sense from a commercial perspective. American goes back to the original schedule on Jul 15, and demand has remained strong.

❖ The more logical conclusion is that this is American trying to build in operational slack.

❖ This strategy sounds more plausible considering recent media reports of cancellations and delays due to crew shortages. American has made no secret of the fact that it has been in the throes of getting pilots back into the system, but that is supposed to be done by the end of this month.

❖ We now believe that this is just American reacting to an operational degradation, trying to keep things running smoothly, or more smoothly than they are today.

❖ We now wonder whether this will be extended beyond Jul 14. The success of getting the operation back up to speed will likely determine the answer to that question.