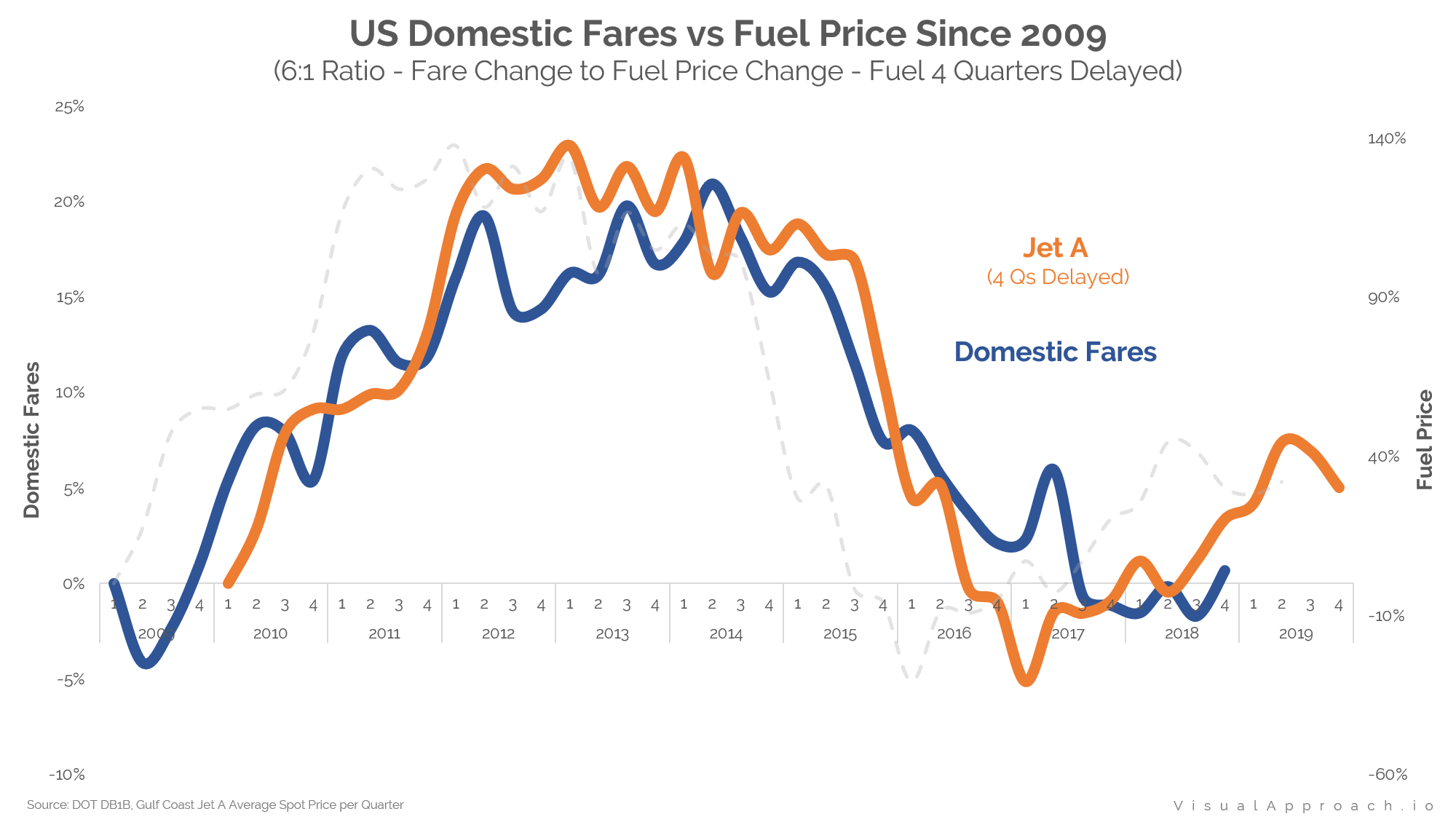 I have long disagreed with the notion that fares follow fuel price, at least directly. Fares (price) are a function of supply (seats) and demand. As such, too much capacity in a market, and fares will drop. Not enough capacity in a market, and fares will rise. Yet, as pricing moves to bring equilibrium to supply and demand, there is theoretically a floor to how low a price can go: the cost of flying that seat.

Since fuel is such a large piece of the cost puzzle (~20-25% of total expenses), it stands to reason that fares should, in some way, be affected by the price of fuel in a rational market. A market which collectively allowed pricing power to increase as costs increased, yet competitively drove fares down as fuel prices dropped would be a strong sign of rationality. The word “rational” is not often used to describe the U.S. domestic airline business, and is not a term used lightly. Yet, here we are.

Are fares being affected by the price of Jet A? Kind of. The above chart shows the inflation adjusted change in domestic fares over the past decade. To compare, the change in the price of a gallon of jet A is shown with the dashed gray line. The chart compares changes in fuel to changes in fares on a 6:1 ratio, meaning a 6% increase in fuel price would correspond to a 1% increase in fares. By offsetting the change in fuel price by 4 quarters, the overlap suggests that fares do, in general, respond to changes in the price of fuel. They just take about a year to respond.

Are fares being affected by the price of Jet A? Kind of

From the chart, you could make a conclusion that fares are responding to 1/6th the change in fuel price, one year delayed. On average, this does seem to be the case, with a few exceptions in early 2017. When we look at market pricing by distance, the correlation loses some significance, but remains largely intact.

On stage lengths shorter than 500 miles or longer than 2,000 miles, fare changes have recently out-performed the advanced year’s fuel price changes. However, on markets between 500 and 2,000 miles, fares have lagged. This suggests that competition (through supply and demand) remains the dominant force in setting fares in those markets. Still, there is an apparent connection between the price of fuel and the past decade’s fares. This is a strong indication that the U.S. domestic industry, as a whole, is no longer willing to sacrifice profits for market share, as they did during so many previous decades. Of course, it also happens that the past 10 years coincided with the longest period of continuous economic growth in United States history. It’s one thing to be rational when everything is going well; It’s another entirely when it all hits the fan.

Assuming this trend (and economy) holds, the charts suggest we should see some strengthening of domestic fares into 2020. There does not seem to be any strong capacity additions on the horizon that would be likely to derail the trend. Economic upheaval aside, Moxy seems the next opportunity to inject some excitement irrationality back into the U.S. domestic market. April, 2021 may signal the start a different, yet all too familiar story. Until then, it seems the economy remains the sole variable to watch.