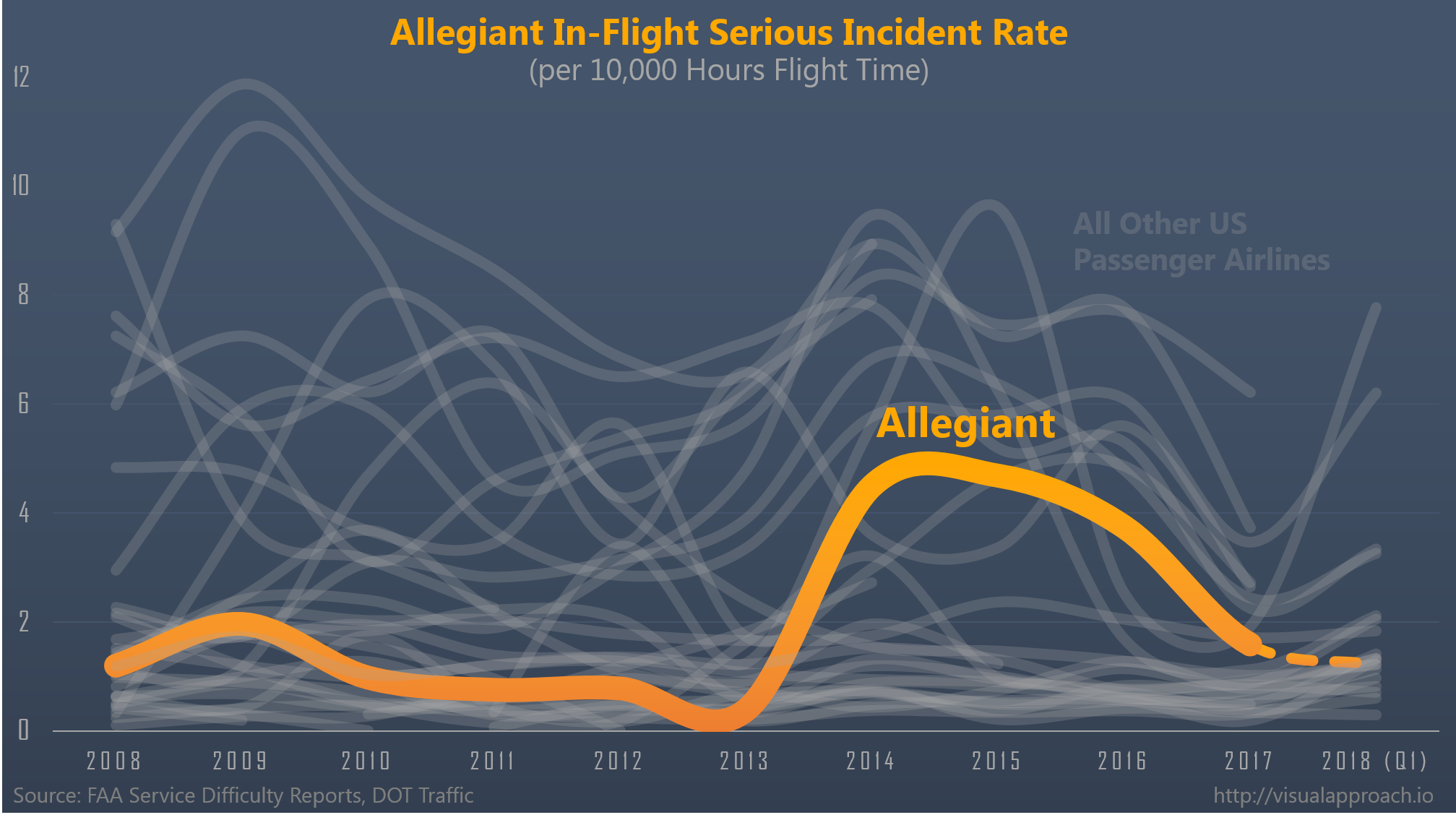 60 Minutes recently did a piece bringing into question Allegiant’s safety practices.  It’s worth a read and a watch if you’ve yet to do so.  In this report, the 60 Minutes team makes some very bold claims regarding Allegiant:

“I have encouraged my family, my friends and myself not to fly on Allegiant.”

“But what really sets it apart from the competition is that its planes have been nearly three and a half times more likely to have serious in-flight mechanical failures than other U.S. Airlines.”

Based on the information provided by the FAA, it is very easy to analyze the data collected by 60 Minutes to determine if there is some context lost.  The investigation utilized the Scheduled Difficulty Reports (SDRs) filed by Allegiant and seven other airlines, according to their reporting.  All SDRs are available to the public for all U.S. airlines, as well as general aviation aircraft, which allows us to look at all incidents, their severity, and exactly where Allegiant falls in the mix.  This data is freely available in its entirety, via the FAA website, and it is where we begin our search for context in 60 Minutes’ claims

Is Allegiant “nearly three and a half times more likely to have serious in-flight mechanical failures than other U.S. airlines?” 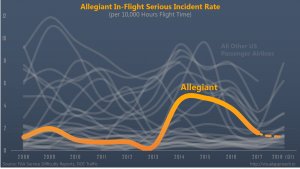 Yes, 60 minutes is technically correct:  Allegiant did have 3.5 times the serious incident rate of other airlines, but only if you selectively choose which you count as the “other airlines.”

By reviewing the FAA SDRS database, we can quickly draw context to 60 Minutes’ claim.  While 60 Minutes limited their search to eight airlines (seven plus Allegiant) we do not have such limitations and can look at the entire North American airline fleet. 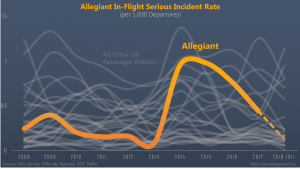 The implication of this is important.  If 60 Minutes would not put their family on an Allegiant flight due to their safety record, what would they do with the 16 other airlines with worse records?

As with any analysis, data transparency is important.    The investigation limited the number of airlines to eight, and the timeline of the investigation to a very short period of just 22 months.  Those happen to be the 22 months were Allegiant saw their highest incident rate, while the lower rates before and after were not included.  Of the eight airlines analyzed by 60 Minutes, Allegiant was one, and only five others were used to make the 3.5 times claim:  Delta, United, American, Spirit, and Jetblue.  No information was provided as to the other two airlines analyzed, what their incident rate was, and why they were excluded from the study.

This led to questions of transparency from the 60 Minutes report which clued us in to some potential issues with their conclusions.  As such, in our analysis we went back 10 years and included the top 25 airlines by size to provide full transparency and context.  All airlines are U.S. registered passenger airlines, and each individual airline is shown.  However, I have anonymized each of the other airlines to prevent any other pitch forks and torches from being raised without full context, an ironic conclusion not warranted from a blog post on the importance of finding context.  One exception is the chart below, which shows the 5 airlines chosen by 60 Minutes and how they compare with the rest of the industry and Allegiant. 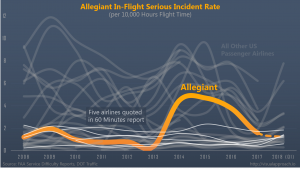 In the report and subsequent Overtime piece about the investigation, 60 Minutes disclosed the reports they received as the Service Difficulty Reports which they received as part of a Freedom of Information Act request.  It took them 7 months to conduct the study after a long process to get the FAA and Allegiant to release the data, according to their report.  I offer no explanation as to why it took the FAA so long to release the information on the eight airlines other than to point out that it took us 2 hours to find the information on all airlines.  Speculation has suggested that making a formal Freedom of Information Act request for information that is already publicly posted on a website by an investigative journalist could raise red flags within the FAA and Allegiant and be interpreted as a hostile move.  That still would not excuse the FAA or Allegiant for objecting to the release, which seems to have escalated the tension of the story.

However, it was important that we conduct this study with the same information set handled by 60 Minutes to provide the required context.  Within the SDRs are an incredible amount of individual reports, most of which are fairly benign.  Burned-out light bulbs behind emergency exit signs found on an overnight check, or safety placards broken during a maintenance procedure are examples of the rather mundane examples of what you will find in the Service Difficulty Reports.  60 Minutes rightfully discounted those reports and limited their reporting to “we found more than 100 serious mechanical incidents, including mid-air engine failures, smoke and fumes in the cabin, rapid descents, flight control malfunctions, hydraulic leaks and aborted takeoffs.”

It was important that we conduct this study with the same information set handled by 60 Minutes to provide the required context.

We also made the same categorization, which is easy to replicate since each of those events has a specific code in the SDR.  We can also replicate the 100 number when we limit our data to the 22 months disclosed in the 60 Minutes study.  In short, making sure we were comparing the same data was important and in this case we are looking at an apples to apples comparison.

To calculate the rate per departure and hour, we pulled data from the DOT form 41 table t.2, which summarizes all flight departures, hours, miles, etc. for each of the airlines.  2018 data is limited to Q1 (January 1st – March 31st) and uses scheduled departures and hours, since final reporting is not yet out on all airlines.  It also only includes one quarter versus four quarters as depicted in all other years.  However, since it is a rate and not an absolute number, it is accurate and reflective of the incident rate so far in 2018.

Is Allegiant a Safe Airline?

At the core of the 60 Minutes investigation is the assertion that Allegiant is not safe.  The report bases this assertion on the Service Difficulty Reports, but also from anecdotes of engine failures and evacuations reinforced by emotional interviews with passengers on those specific flights.  It is important to point out that every airline has reported engine fires/failures, smoke in the cabin, aborted takeoffs, and evacuations.  This week’s tragic engine failure on the Southwest flight is a great example of how things happen even to the safest of airlines, and Southwest’s safety record is widely regarded as excellent.  Separating the individual anecdote from overall trend and context is critical, it is why Southwest is not and should not be considered an unsafe airline, and is also why Allegiant is not and should not be considered an unsafe airline.

In 2018, Allegiant is now one of the safest airlines in a country with very safe airlines.

Something happened during 2014 and 2016 to increase their serious incident rates.  It was a concern (emphasis on the past tense), however at no point was Allegiant the highest in serious incident rates, let alone “unsafe”.  In fact, in this author’s opinion, all airlines in the U.S. are safe airlines, including those with higher incident rates than Allegiant which were omitted from the 60 Minutes report.  This in no way excuses Allegiant from the maintenance challenges they saw between 2014 and 2016.  It is also worth nothing that this was during a period of intense pilot negotiations from 2014 to 2016, that resulted in lawsuits, restraining orders, and a questionable termination of a pilot who ordered an evacuation following an engine failure (again, the need for context is reminded before pitch forks and torches are raised).  But, the correlation between the elevated incident rates and pilot negotiations is just that, a correlation, and not causation.  It is Allegiant’s responsibility to ensure they are operating a safe airline regardless of other events that may be happening at the airline.  Allegiant has done this, reducing their serious incident rate by 70% since its peak;  a peak that was never the highest in the country.

Regardless, when looking at the full context and using the same methods used by the 60 Minutes investigation, Allegiant is clearly a safe airline.  In 2018, Allegiant is now one of the safest airlines in a country with very safe airlines.

Would I allow my family to fly Allegiant?