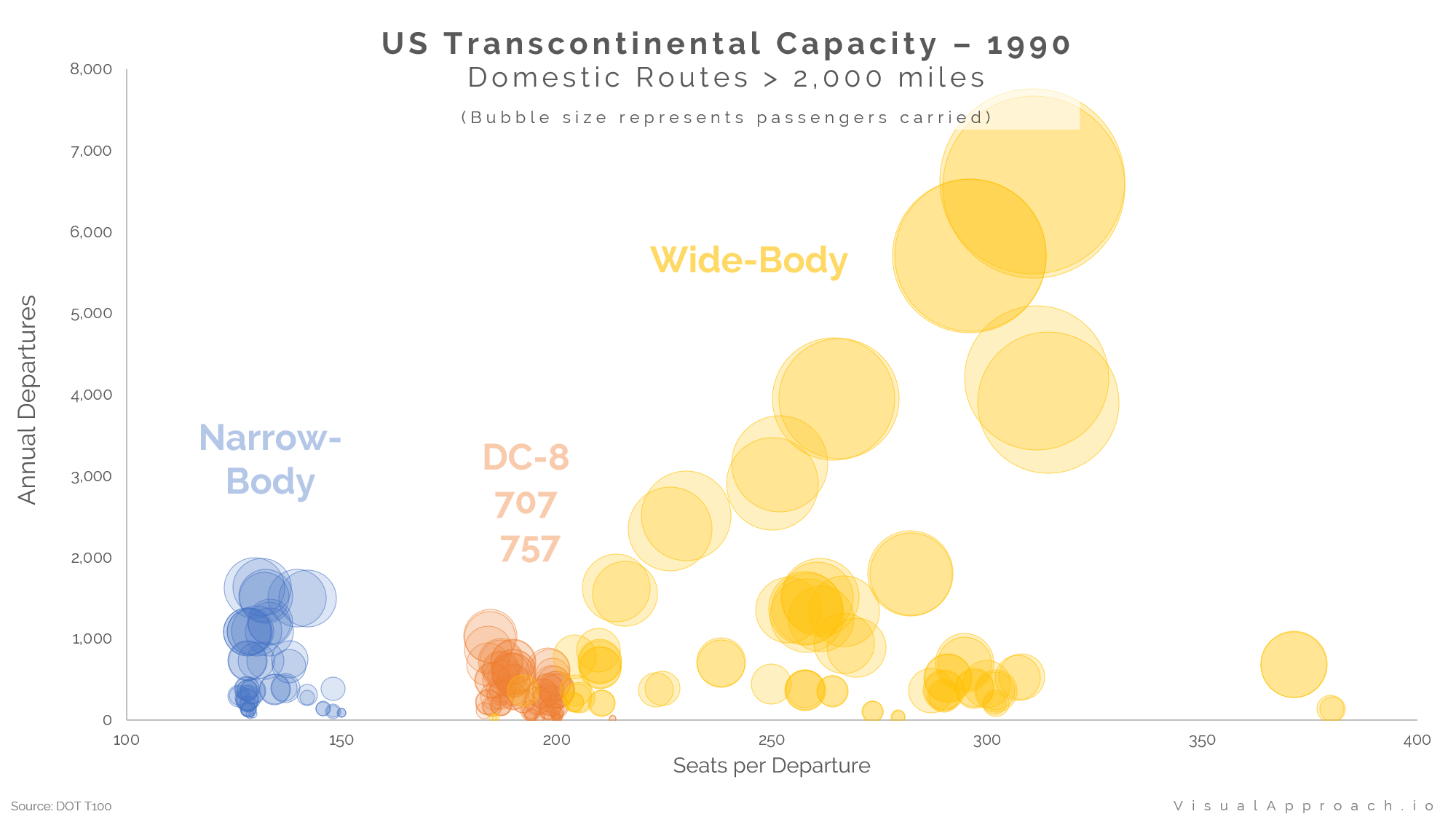 Airbus officially launched the A321XLR at the Paris Airshow last week with 4,700 nm range and 243 commitments. The improved range is significant, up from the LR version with 4,000 nm range. However, when you consider the vast majority of A321s flying today are -200s with approximately 3,200 nm range, the XLR will offer almost a 50% improvement in range over the current fleet.

This type of range improvement is significant, to say the least. Yet, we know wide-body aircraft have much longer range, up to 9,500 nm with the A380. Of course the aircraft capable of these distances are also much larger, leveraging the infrastructure required to carry the requisite fuel and, in turn, the large amounts of passengers (and revenue) to offset.

While the XLR’s 4,700 nm range makes news for extending the reach of the narrow-body, it is the inherent economic advantage the narrow-body has over the wide-body that creates a truly disruptive scenario. Setting aside the aircraft infrastructure required to carry the ultra long ranges some wide-bodies have been designed to accomplish, the economic advantage of the narrow over the wide can be oversimplified into real estate terms. With a six-abreast layout and only one aisle, narrow-body aircraft are able to maximize the seat to aisle ratio at 6:1. The largest wide-bodies are limited to 10-abreast seating with two aisles, or a 5:1 ratio. This simple allocation of real estate gives narrow-body aircraft an inherent 20% advantage due to the efficiency of their cross-section.

What could this aircraft mean for the future of North America to Europe traffic?

Yet, this advantage becomes greater when you consider the smaller types of wide-bodies the A321XLR will be a candidate to replace. The A330 and 787 have an economy cross-section of eight seats and two aisles, or a 4:1 ratio, an impressive 33% advantage for the XLR. While this can’t be necessarily translated directly to cost advantages, economic analyses still suggest the seat cost advantage of the A321XLR over wide-bodies will be in the 15% – 20% range, with Airbus claiming a 30% fuel burn advantage per seat.

(Granted, the narrow-body still cannot do everything a wide-body can, even though longer ranges have been achieved. As we will discuss later, there are challenges, including airspace and airport constraints, the profitability of premium classes that have been optimized around wide-body platforms, and the ability to generate additional revenue through large, container-loaded cargo holds. Yet, none of these limitations are show-stoppers, and there are ways for narrow-bodies to circumvent the technical limitations and dwarf the economic disadvantages.)

As the narrow-body is able to extend further into the wide-bodies’ traditional markets, how could this affect the fundamentals of airline networks as we know it? In particular, with 75% of the trans-Atlantic flying within the range of the 321XLR, what could this aircraft mean for the future of North America to Europe traffic?

In 1990, the vast majority of flights over 2,000 miles within the U.S. were flown with wide-body aircraft. DC-10s, L10-11s, 747s, and 767s dominated the long-haul domestic skies. Legacy DC-8s and 707s still operated on some routes, however their time moving passengers was quickly coming to an end. Traditional narrow-body aircraft flew very few long distance flights at the extreme edges of their ranges. In 1990, if you were going beyond 2,000 miles, chances are you were flying a wide-body.

Now that narrow-body aircraft are routinely deployed on markets up to 3,000 miles, we can see how this has affected the transcontinental market. Today, the transcontinental market looks nothing like it did before narrow-bodies could fly the required ranges. Wide-bodies have all but disappeared in a market they once dominated, and the remaining wide-body flights are largely limited to repositioning flights between airlines’ international hubs.

[The glaring exception to this was the 757. As the first true long-range narrow-body, the 757 arguably never fully lived up to its narrow-body economics. Built with commonality to the 767, a wide-body, the 757 was arguably a shrink of a wide-body rather than a stretch of a true narrow-body. While this point is certainly open for debate, the inability of the 757 to produce the economics of a stretched narrow-body like the 321 prevents it from being considered as viable evidence against long-range narrow-body economics. Hence, in these regards, the 757 fits with the 707 and DC-8 in terms of very capable narrow-bodies, at the cost of economic efficiency.]

Looking at the overall transcontinental market, the drastic change in the makeup of aircraft types becomes stark. In the end, economics ruled, and where you had a 1 in 10 chance of flying a narrow-body over 4 hours in 1990, now you have an 8 in 10 chance. When given the opportunity of a more economical option or the larger aircraft, the market chose the economical narrow-body by a very large margin.

Fast forward to the potential disruption we are facing with the introduction of the A321XLR. While 4,700 nm doesn’t open any new transcontinental routes in the U.S., it certainly does open the possibility for trans-Atlantic flights to and from Europe (among many other flights currently operated by wide-bodies). The distribution of the traffic across the Atlantic today looks suspciously similar to what the U.S. transcontinental market was looking at in 1990.

With 75% of the current trans-Atlantic capacity capable of being operated by an A321XLR, the market is ripe for disruption. While the comparison between wide-bodies and the XLR has been so far limited to flights operating on the same route, the ability for the XLR to open smaller routes could be equally as disruptive. In fact, looking again at the U.S. transcontinental market as a proxy, the majority of the 321XLR’s future flying will likely come from these new routes, further siphoning traffic from wide-body connections.

When talking about transcontinental markets in the U.S., the market to consider is L.A / New York. In 1990, LAX was the only LA area airport with flights to the New York area. Regardless of which airports you used, if you were trying to get between Los Angeles and New York, the overwhelming chances were you would be flying a wide-body.

Today, narrow-bodies have dominated the market, offering not only more frequencies, but also more options. No longer are you required to drive to LAX to fly to New York. With non-stops to the New York area out of Long Beach, Ontario, and Orange County, narrow-bodies have opened markets incapable of being flown by wide-bodies. Further, traffic that was being routed over the LAX – JFK corridor now has better, and more economical means to travel.

Consider San Diego to New York. In 1990, there was one flight a day, a wide-body that flew SAN – JFK. In 2018, there was an average of 10.8 daily departures from San Diego to the New York area, 78% of which were on pure narrow-body aircraft, 22% on a 757. That is over a ten fold increase in direct flights, and an increase of traffic on the sector by over 1,200%. While more direct flights certainly stimulated demand, the vast majority of the 1990 traffic flying from San Diego to New York was likely connecting through Los Angeles, and on the LAX – JFK wide-body. The longer ranged narrow-bodies not only eliminated the need for wide-body service on the routes they could not fly more economically and with more frequency, they also removed the connecting passengers required to make trunk routes, such as LAX – JFK, viable with wide-bodies.

The implications of this phenomenon on today’s trans-Atlantic wide-bodies are impossible to deny. As the A321XLR begins opening direct routes between smaller cities, the passengers now no longer required to connect on the larger wide-bodies will put further economic pressure on the wide-body aircraft. Additional frequencies from the XLRs at lower seat costs will continue to put yield pressure on the wide-body aircraft. Those lower yields will drive airlines to lower seat costs and more frequencies, which can only be achieved with the 321XLR (for now… wink, wink Boeing. Your move.)

Law of Fragmentation: When an aircraft with lower unit costs and lower trip costs enters a market, airlines will use it to keep adding frequencies and taking share until it has saturated the market

We refer to this process as fragmentation, and is exactly what happened to the U.S. transcontinental market. When an aircraft with lower unit costs and lower trip costs enters a market, airlines will use it to keep adding frequencies and taking share until it has saturated the market. (Fragmentation can be such a powerful factor in the future of fleets that we have arbitrarily declared it a law, until someone proves us wrong or arbitrarily un-declares it. Whichever happens first.)

Yet, we should look closer at the limitations that we suggested exist across the Atlantic, and were not present in the transcon market. Firstly, the use of the North Atlantic Track system limits the amount of aircraft that can fly across the Atlantic. This is a real limitation, however a strong argument can be made that technology has progressed to the point where an economic reason (such as a super-economical narrow-body) would be enough to push a solution forward. There are also airport slot and capacity restrictions in the near term, however we warn that airports may feel falsely protected by those restrictions, while the major benefit of the long range narrow-body is in avoiding the connection and slot constrained airport altogether. What may seem to be protective against the effects of small aircraft, could ultimately drive traffic elsewhere.

The glaring example of this is Heathrow. The JFK-LHR flights that are dominated by wide-bodies today are carrying a healthy contingent of passengers destined for other destinations in Europe or the U.S. As we witnessed in the U.S. transcontinental market, the need for a connecting passenger to even be on a JFK-LHR segment could be completely eliminated by an economical narrow-body with sufficient range.

The cargo capacity advantage of wide-body aircraft is a tangible advantage, and one worthy of discussion. American, Delta, and United brought in a combined $3.1b in cargo revenues in 2018, a significant portion of which came from international wide-body operations. However, with total cargo revenues (including domestic) amounting to less than 10% of the international passenger revenues, it makes it difficult for cargo to enter the strategic discussion beyond the ‘nice to have’ arena. With sufficient dedicated freighters crossing the Atlantic, along with impressive capacity from FedEx, UPS, and DHL, the remaining space sold in passenger wide-body bellies tends to be marginal. Granted, $3b is nothing to sneeze at, but when an A321XLR launches three frequencies to an incumbent’s one wide-body, the cargo revenues still on board will be quickly overwhelmed by the paying passengers who are not.

Still to be resolved, however, is the efficiency of the narrow-body to carry business and first class traffic. No doubt capable of handling premium classes themselves, the A321XLR will still need to prove that it can move the premium passenger as efficiently as a wide-body. While this has yet to be proven, Jetblue’s successful A321 Mint product provides a compelling case for the narrow-body. Not only have premium passengers already been accommodated at wide-body expectations of comfort, but Jetblue has done so at a fraction of the legacy premium price. This provides a compelling example of how the A321XLR could ultimately replace all segments of the market within 4,700 nm.

The claim is admittedly bold, however we expect over 80% of the wide-body flights within 4,700nm to be replaced with narrow-bodies (and Boeing’s inevitable NMA, whenever it happens) over the next 20 years. This would have been an almost unheard of claim regarding the U.S. transcontinental market in 1990, but is exactly what happened. Fragmentation is a powerful force, and the allure of more flights for cheaper fares has already proven to be significantly more interesting to paying passengers than higher ceilings and larger aircraft.